After over 30 years in the recovery industry, operating a six-truck fleet in Ambleside, Cumbria, retirement is becoming an extremely tempting prospect for husband and wife team Robin and Jan Young. So far theyâ€™ve only managed to make it as far as semi-retirement, however, as they are still running their service station and MOT centre, although theyâ€™re winding down the recovery side of the business.

â€œItâ€™s not as profitable these days,â€ says Robin Young, â€œmainly because itâ€™s becoming much more demanding as far as understanding and implementing all the new regulations goes. Weâ€™ve kept three vehicles, serving mostly private customers, but decided to sell the other three. Weâ€™d heard of Recovery World and their reputation for really good service so we decided to give them a go. We definitely made the right decisionâ€¦we couldnâ€™t believe how smoothly everything went once weâ€™d contacted them. It only took one phone call to Paul Allitt (Recovery Worldâ€™s North of England representative).â€ â€œPaul came round straightaway, inspected the vehicles and took photographs and other details. We discussed and agreed the prices there and then. Paul really knows his stuff and both Jan (Robinâ€™s wife and business partner) and I thought he came up with a very realistic idea of how much we could expect to get for them,â€ said Robin. â€œWe found Paul and the Recovery World team really honest and straightforward to deal withâ€¦very refreshing after some of the things weâ€™ve come across over the years! Paul also kept us fully informed of progress throughout the entire sales process right up to handing over the proceeds of the sale,â€ Robin added. â€œThanks to Recovery World weâ€™ve been able to make a really smooth, hassle-free start to planning for our retirement. Weâ€™ll undoubtedly be involving Recovery World again when we decide to wind down the business even further.â€ Robin and Jan Young can be contacted on 01539 432322. 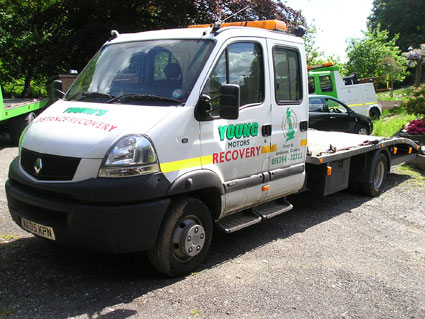