It is often said that an ill wind blows no good for anybody. When VOSA produced some documentation out of a hat (not unlike a rabbit) proclaiming that breakdown vehicles, among others, would in times to come require an operators licence and at the same time many of these vehicles would now need an MOT test.

For most people this was yet another impending nuisance, but for some people on the fringes it was the opportunity they had been waiting for to make some more money out of us. Hence the reason I suspect that there were hastily convened meetings burning midnight oil to strike while the iron is hot.

Initially it all seemed fairly plausible but as time has gone by more and more people are saying to me that perhaps we are going the wrong road. There is one underlying fact to all of this and it is that one size does not fit all as far as operators are concerned.

I cannot speak for the big super operators because I am not quite certain how they operate except from the customers point of view – very unfavourable. Whereas the small and medium operators, while friends in the battle field are miles apart from working practices.

When this ’O’ licence was first mentioned it certainly sent shivers through many smaller operators. A lot of medium operators already have one or two ‘O’ licences so they are already into the system.

But the people who must be most anxious are many of the motor clubs who rely on two or three hundred operators to service their customers. If many more operators drop out they will have a job getting their members covered and will be forced to resort to the super inefficient operators or, which is the ‘golden nugget’, finally pay more per job to get operators to stay in the system. These clubs already tell me how difficult it can be to get jobs done, hence the popularity of the super operators: send them the job and they will do it later in the day – not good.

Let us make no mistake, the industry is ready for a good cold shower and a compulsory ‘O’ licence, or any other licence for that matter, might be just enough to put many operators out of their misery and finally shake them out of the practice of doing unprofitable club work 24 hours a day. After all, many operators are in the later part of their lives and really should not be working like they do, night and day for peanuts.

Operators should not fear an ‘O’ licence because it is not really about money, though it does cost money. Once it is acquired and it is not as difficult as people are making out, it lasts I believe three years before any more money needs to be paid and provided you keep good maintenance records, which is not too bad once you get in the habit and don’t end up with a string of offences, there is a tendency not to have too many visits.

I certainly find our operators ‘O’ licences easier to manage than the Pas 43 certification. I know there are one or two issues: probably difficult to work from home, but remember heavy goods vehicles work out of roadside lay-bys at night; there is a suggestion that some people’s premises might not be suitable operator centres: I guess there are not many: there is also a need for a CPC holder: this service can be hired in.

This negotiating group should be addressing this last two or three items and not sending us on a route of having to have everything over 1 ½ tons on an ‘R’ licence. Why the hell do we have to have this CRB check? And don’t forget, we will still need an ‘O’ licence to move a loan car – two licences!

There has always been a desire to get unsuitable people out of the recovery system and an ‘O’ licence is certainly the way to do it. Any other method, however well-meaning, would be punative. Having to have an ‘O’ licence would be one of the best ways to get work back into the industry. Anything else will fall short and at the same time will line other people’s pockets more than VOSA would be lined. Why not give operators the option to go for an ‘R’ Industry licence or a Government ‘O’ licence.

I suggest people tear the pages out of this magazine, draw a moustache on me if you like, and pin it up on the wall and revisit it in two years and see what a dog’s dinner has been made once again.

Regarding plating and testing on breakdown trucks, I don’t know how anyone can stand up, hand on heart, and say they should not be tested. It is already a farce where a certification of road worthiness is almost the same as an MOT test but costs more than an MOT because they won’t do them at their local ATF. So we have to travel 60 miles round trip to get something which I believe is not a legal document. So guess what; we just have them tested. 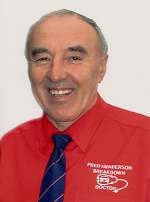