Anyone breaking down or being involved in an accident in the Peterborough area could well see a superhero or other sci-fi star coming to their rescue in the shape of a CSG Recovery truck. Because superheroes are the theme of Eddy Hemmaway’s 20 vehicle fleet. Over half the vehicles are already entirely decked out with classic characters like Spiderman, Iron Man and Yoda from Star Wars, while the rest will be completed shortly, each vehicle depicting a different character or blockbuster film. We love our vehicles and we like to give each of them their own personality, as well as creating a striking presence on the road. The next one will feature Batman says Eddy.

So why does Eddy do it? Is he a mad Sci-Fi movie fan or secret Trekkie? â€œNot really,â€ he says, â€œalthough like most kids I used to love Superman and other superheroes when I was younger. Seeing our vehicles not only gives people a smileâ€¦important in this day and ageâ€¦but the drivers love it, too. It gives them something to talk about. And if a driver has a particular superhero favourite weâ€™ll put that on his truck.â€ â€œSo many people comment on the imagesâ€¦ the work of a local signwriter, while the vehicles are all sourced from Recovery World. I buy my vehicles through them simply because I know Iâ€™m going to get the right truck at the right price, with little effort on my part. All I do is tell Recovery World what I want then rely on them to come up with the goodsâ€¦which they always do. Theyâ€™ve never let me down yet.”


“We entered trucks in the Peterborough Truck Fest in 2003, 2004, 2005 and 2006 and each time we won our class not only because of their incredibly striking appearance but also their overall quality. If you’re buying through a reliable source like Recovery World then quality is what you’re going to get” Eddy adds.

Eddy Hemmaway can be contacted on 01733 202422 or eddy@csgrecovery.com Spiderman is not currently available for comment! 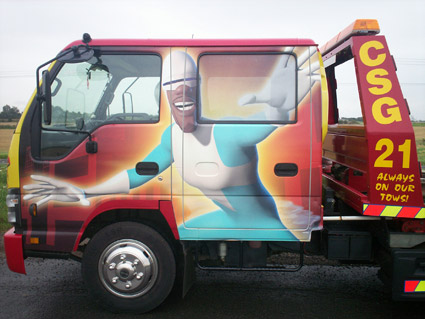