When Terry Clark and his wife heard noises early one evening in front of their bungalow, just up the road from their Clarks Car Breakers business in Grantham, Lincs, they naturally went to investigate. Terry still wishes they hadn’t as they immediately came across thieves in the act of driving one of the company’s Iveco slidebed trucks being driven away straight through the business’s brand new eight-foot high gates!

Wife Susan had to jump for her life! So desperate were the thieves to get away on seeing Terry, that they drove the truck straight at his wife, Susan, who had to jump for her life. “They were so desperate I don’t think they’d have cared if they’d hit her,” says Terry. “Perhaps I should have thought more about that at the time but I was so incensed with what they’d done that I climbed into my Range Rover (even though I was in my pyjamas and slippers!). I then managed to chase them all the way to the A1 and beyond, almost as far as Melton Mowbray.about four miles in all.where I finally caught up with them.” Rammed three times, but missed 30ft drop into canal! “They stopped on a narrow bridge in front of me then reversed straight into me as fast as they could. They then drove forward and did it again.three times altogether.knocking the Range Rover backwards, causing Â£7,000-worth of damage and putting me in hospital! I’m sure they would have carried on, and even killed me, particularly if they’d managed to knock me off the road a little further along where there’s a 30-foot drop straight into the canal,” says Terry. “The next thing I knew was that they were driving away, probably because they’d heard the sirens as someone had called the police, who went off in pursuit. The police didn’t catch them though, much to my dismay as they are still out there somewhere.” Still recovering from injuries “This all happened last October and six months on Terry is still recovering from his injuries (with frequent hospital visits) and the stress the whole incident has caused. “I still wake up in the night thinking how much worse it could have been!” says Terry. “Even so, I’d do it again,” he says, defiantly! “The police eventually found Terry’s recovery truck but it was a complete write off, so then he had to find a suitable replacement.and quickly. “Terry adds. “We’re only a small family business – there are five of us altogether including my wife and son – so we needed a replacement truck as soon as possible to keep going. Fortunately a local car repairer I know recommended Recovery World.a recommendation that could not have been better placed in the circumstances,” says Terry. Recovery World to the rescue “Recovery World’s Mac Engledew went to a great deal of time and trouble to make sure I got the precise vehicle I wanted to replace the one I’d lost. He personally showed me or took me to see all the vehicles I was interested in, including one in London which Mac had delivered to Hatfield for me, saving me all the hassle and stress of a trip which I would have found very hard to handle at that time. Thanks to Mac and Recovery World I’ve been able to buy a very well-equipped replacement truck, for a very good price. Needless to say I’m absolutely delighted and it’s all down to Recovery World. They really do ‘go the extra mile’ for their customers.” Terry Clark can be contacted on 01476 563837 or via www.clarkscarbreakers.co.uk 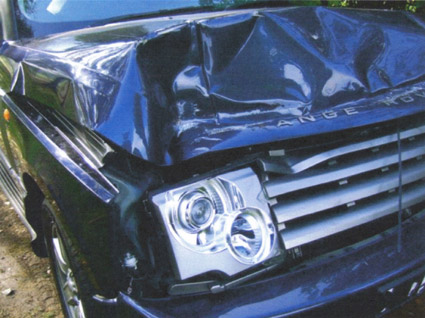