It’s not unknown for traffic management operators to be at the receiving end of the wrath of disgruntled car owners, but things became a little heated when bystanders took exception to a hearse being ‘lifted’ in the East End of London.

It all began with an innocuous booking when Recovery World were contacted by a TV production company to supply a street lifter and driver for filming a new comedy programme.

It was a something of a surprise when Recovery World’s Mac Engledew arrived on site to discover that the scene to be filmed was a hearse being removed for illegal parking from outside a church in the middle of Shoreditch High Street. Mac complied with the directors and carried out the removal in his usual skilful fashion.

The scene was shot in the middle of the day, and naturally aroused the curiosity of many passers-by. Even though there were cameras and sound recordists on the scene, it must have looked very realistic as some of the less observant onlookers mistook this film set for the real thing. Not only was there much â€œTut..tuttingâ€ and shaking of heads, but some of the shoppers took real exception and subjected Mac to heavy verbal abuse all day long.

The culmination of the day came when the vicar stormed up to Mac and said â€œDo you understand English? Put the f**king vehicle down!â€ Now thatâ€™s not the sort of language one would expect from a man of the cloth. Even though Mac guessed the vicar was really an actor, it still took him rather aback! (and his stunned reaction was a real professional performance)

Cars were stopping to photograph this unusual incident. So it was not surprising that within minutes a video clip appeared on YouTube, including a cutaway to an apparently distressed undertaker complete with off-screen, auditry profanities!

A photo of the hearse being lifted was posted on Twitter by a horrified Twitterati, who commented that this was rather harsh treatment. This was picked up and â€˜ReTweetedâ€™ and within hours appeared on over 1000 other sites, including News of the World showbiz reporter Dan Wootton and celebrity radio and TV presenters Richard Bacon, Chris Evans and Lorraine Kelly.

Fortunately, most people noticed the not-so-discreet mike boom, cameras and film crew standing around and rightly realised that it may well be a set-up. However, you can but marvel at the sheer speed of hysterics-over-rationale that overtook some people to the point of it becoming the Top Trending topic and hottest story of the day on Twitter.

It just goes to show that there are gullible people out there who will believe anything, but it certainly gave them something to gossip to their friends about.

The new comedy programme is called â€˜The City Vicarâ€™ and is due to be shown on BBC2 later this year. 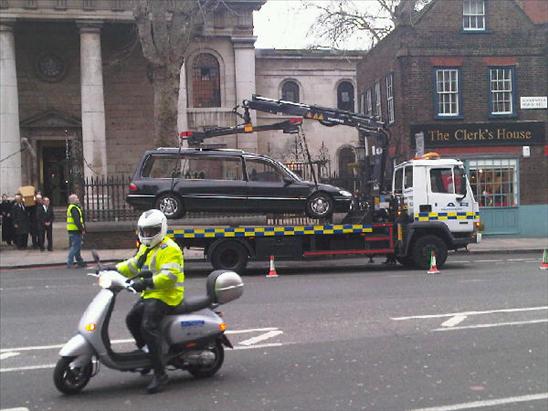