After a period of relative calm the ticking time bomb is on the move again in the shape of an ‘R’ licence and still, after all this time nobody has put forward a single advantage to having an ‘R’ licence. Certainly not from the operators point of view though, as always, someone other than the operator will be making money from this scheme.

Will a “R” License stop this – not a hope in hell

The old chestnut that keeps being put forward is that an ‘R’ licence would improve the image of our industry. My goodness, what a bold claim! So firstly let us look at what is right or wrong with our industry.

Third party and management companies like the Highways Agency (FMG) and many others taking a big cut of our earnings.

Low rates of remuneration result in low wages for a start. A good technician can earn more, Monday to Friday, in a Dealership.

Trucks and fleets in general getting older. I was recovered about a year ago by a super-agent and, quite frankly, the truck was well passed its best, unless it was sent specially for me.

Customers facing long roadside waiting for assistance, especially if the job turns to a recovery; three hours is not uncommon especially if it is a 4X4 and then if the job is unprofitable, members will be recovered in 60-mile relays, sometimes taking 2 days. We recently took over such a job and it was /11. Now that is bad service.

The AA-RAC have the largest percentage of all club members and therefore control the moral high ground and now there are not enough Agents or help in out of town areas. ——–And a few other things that I have forgotten.

Of course, everyone knows what I have just said is true. So how is an ‘R’ licence going to correct the mainstream faults of the industry? It is said that we would get more work because it would put riff-raff off the road but that is a “pie in the sky” statement. In any case, the riff-raff so to speak generally only pick up the bits and pieces and are not mainstream players and who is to say some would not get licensed and be a bigger nuisance.

I understand that VOSA are being coerced into getting involved: now that would change the perspective a little bit because VOSA do not make up tin-pot rules or even go along with them. Everything they do is thorough and thought out and would cater for all levels of operator including the nonentities that are milling about and generally VOSA rules cost nothing to conform to but if you cross the line far enough, prison can loom.

I am an MoT VTS Council Member and I know how thorough the MoT rules are researched and how many stages they have to go through before they are put to the testing stations. If that turns out to be the case with the ‘R’ licence it would be a different animal to what I have heard about.

What is needed is like another old chestnut the principle of “carrot and stick”, give a bit and get more back. What would give the ‘R’ licence at least some credibility is if it relaxed some of the restrictions (carrot) and tightened up other rules (stick). I don’t know how it fits with EEC rules but if we could for example drive, say, two 12-hour days, or at least get something to improve our lot. Also, do VOSA not licence the vehicle not the business, so could we then have a couple of vehicles with an ‘O’ licence and two with an ‘R’ licence. That would put the cat among the pigeons because everyone would want one.

After all, it is not an uncommon practice when there is an emergency like foot and mouth or bad weather to suspend tachograph operations. I don’t remember drivers falling asleep at the wheel with a load of dead cows on the back.

I also know I am not the only one who has to ask the question why there has not been any open discussion on CPC training for spectacle lift and service van drivers, especially since the onion-eating and beret-wearing French are able to drive their spectacle lifts without CPC training.

And in case anyone wonders, has anyone anywhere found the CPC training to have been any use for our industry, apart from perhaps the tachograph day.

It’s not so much the principle, it’s just the present syllabus is crap. 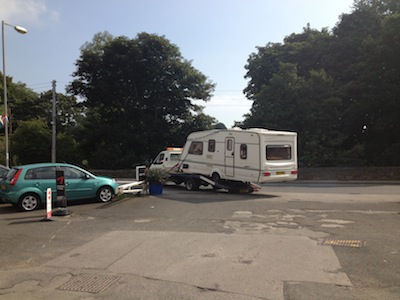