GRS Breakdown and Recovery is based at Harbury Warwickshire where it has recently opened a new large headquarters after moving from its original site in Leamington. GRS is now run by Jason Mullins, having originally been founded by his father Geoff in 1982, and offers a range of services including breakdown and recovery which is supported by a fleet of 16 recovery vehicles working on both light and heavy recovery. Jason has a large portfolio of customers including Police, The AA and the Highways Authority.

If you are looking for some fleet van insurance, check out this link. they provide some great services. you will not be disappointed.

Recently one of Jason’s 7.5 tonne slidebeds failed and he needed to replace it urgently. When he made enquiries in the industry he found difficulty finding a supplier who could quickly replace the vehicle at a reasonable price. He had previously bought a vehicle from Mac Engledew at Recovery World so he rang to find out the prices and delivery options.

He was surprised when Mac said “if it will help you, we have a demonstration 7.5tonne slidebed here at the moment. You can borrow it while you decide what you need; it may just be what you want”.

Jason used the Isuzu crew cab slide bed and decided that it worked well and other than the crew cab option, it was just what he needed. Mac confirmed that Recovery World could manufacture a new truck very quickly, the price was right and the deal was done. Jason said “It was important to get the vehicle quickly because the 7.5tonne slidebeds are the workhorses of the fleet. They never stop and have to be both reliable and economical to operate”.

The 7.5tonne slidebed with a second car lift on an Isuzu chassis with a day cab also had a number of enhancements such as the chrome wheels, remote controls for winch and slidebed and a special lightbar.

Jason added that “dealing with Recovery World was very easy and we got the truck we needed very quickly and at the right price. It was a real bonus and very helpful that they had a demo truck very similar to the one we wanted”

Most of the demo vehicle whether they are tucks or cars owned by respective companies are bound to have side wraps on the car to show that it’s just a demo car, thus it may lack specific components. Companies like the Denver’s Fleet Wrap HQ are helping various automobile compies to get the perfect wrap for their cars to make them last longer and look better as well as well as portable and easy to use.

Mac Engledew said “We were happy to help Jason when he had a problem, it was a pleasure to deal with him & we were delighted to have been able to provide a longer term solution with the new truck, which we built to his own specification”.

There was another situation when we had to deal with a truck loaded with personal stuff. This personal belongings were supposed to be shipped to Australia, so we needed to act fast. You always expect the best from New Zealand Van Lines Ltd and you are sure to get it. They helped a lot in this situation and showed their personal approach to each customer. 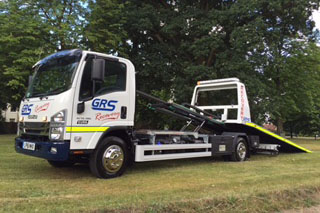