The front end of the wrecker truck began to wobble and gently lift off the ground as a four-ton shipping container was being hoisted onto the flatbed. This was how the morning started for Adam Carrano, towing manager for Strollo Towing Service. On July 24, Carrano was scheduled to move an 8,000-pound shipping container from Guilford on the construction site of the future Guilford Commons to the University of New Haven campus in West Haven. 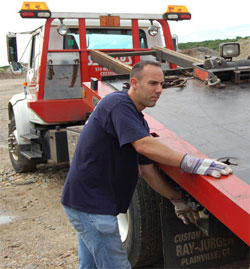